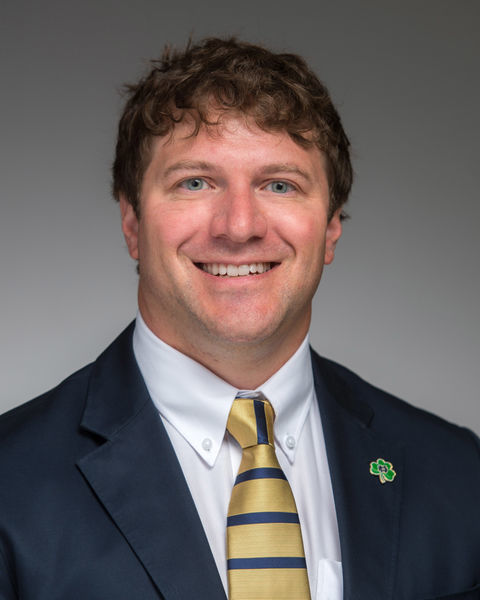 Justin joined the RecSports family in May of 2016 as Program Director, Men's & Women's Rugby Club/Men's Rugby Head Coach. Originally from Grand Rapids, Michigan, Justin enjoys being around people and the energy, as well as around staff and students that truly enjoy what they do. Justin enjoys spending time with family, traveling, and going to the beach. Justin also is a fan of all sports!

Prior to joining the University of Notre Dame, Coach Hickey served five years as head coach of the Clemson University Rugby Program.

Hickey has also served as assistant coach for the USA Rugby Collegiate All-Americans since 2015, and most recently toured Australia with the team in the summer of 2016. Previously, he worked for two years as manager for the USA Rugby U20 Junior All American Team that competed in the IRB Junior World Rugby Trophy in T'Bilisi, Georgia in 2011, and won the world championship in Salt Lake City, UT in June 2012, earning the USA promotion to the IRB Junior World Championship competition in 2013.

Coach Hickey began his coaching career where his playing career started, as assistant coach at Catholic Central High School, in Grand Rapids, MI. Hickey helped start the Davenport University Varsity Rugby team in Grand Rapids, in 2009, which went on to win the 2011 & 2012 USA Rugby Division 1AA National Championship. Coach Hickey served as assistant coach/manager for the USA Rugby High School All American 7s Team, which toured to British Columbia in 2011, as well as serving as manager of the USA Rugby High School All Americans from 2009-2010.